skip to main | skip to sidebar

Sora's shoes started out as a dream I thought would never happen. In my little world of cosplay, shoes were ALWAYS bought, and then modified. Shoes were not something that one constructed...

Unfortunately, Sora's shoes do not exist. This is probably a good thing, because there would be many more cases of people injuring themselves after tripping over their own huge feet.
Personally, I didn't want to end up in the hospital.

Ever gone scuba diving? Snorkeling? Maybe just played in the backyard pool as a kid?
How about those fins.
You know, the kind that make your feet look like funny frog legs. As soon as you get out of water, you're stuck with these huge pieces of plastic and no hope of walking around without them curling up and trying to make you fall flat on your face.
This became the first Sora dilemma.

Remember how I said that purchasing that action figure was one of the best moves I could have made? Here is reason number 2: Valor's feet have this awesome little pivot built into them. It allows you to stand him, easily, on pretty much any angled surface. They're also extremely pleasant to just play with.
This concept ended up saving my Sora shoes, as I decided that I, too, would build them with a pivot. In this manner I was able to walk, run, crouch, squat, and slink about without having to worry about my thin plastic clown shoes busting or the zipper seams popping out.

So here is what I did!

I bought a pair of clown shoes. Thankfully this was easy at the time that I began, because it was Halloween. I walked into a costume store, and picked up a pair for 2 dollars. Thinking this was swell, I grabbed another pair for later use. >.> Upon getting home I realized that a pair of clown shoes were, as I suspected, extremely difficult to walk in, so I cut off the back half, leaving just the front 'hump' of the shoe. However, the front hump was too WIDE to fit snuggly over my foot, so I cut it in half again, across the center. Sora's zipper was going to need to go there, anyhow. Thus, in the end, I had two bisected pieces of clown shoe to make the front. 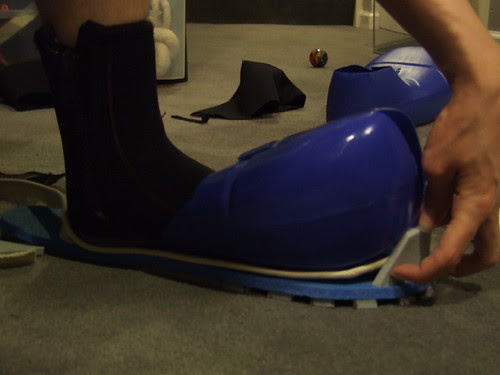 It was time to move onward! The base shoes that I chose were a pair of No Boundaries Converses, available at Wal-Mart for about 10 dollars. The clown hump fit over the front of them nicely, and they were a good shape. Plus they were comfortable! Which makes them one of the few pairs of cosplay shoes I actually don't mind wearing. ^.^ To attach the clowns onto the converses, I drilled a hole through the sides just big enough to fit a Chicago screw.

Lemme talk for a moment about Chicago screws. They're not called Chicago screws here, because I'm in Chicago. Here, I believe they call them screw posts.
Screw Posts
These are the most wonderful little screws known to man. They've ended up having uses in almost every costume I've ever made, even when I didn't expect to be using them at all. They come in a variety of sizes, and, unlike the normal nut/bolt combination, you get a flat head on both sides of whatever you're screwing together(which is great for comfort purposes, especially on the inside of a shoe). These can be purchased easily at any hardware store.

Screw posts were used as my pivot, and held my shoes together. 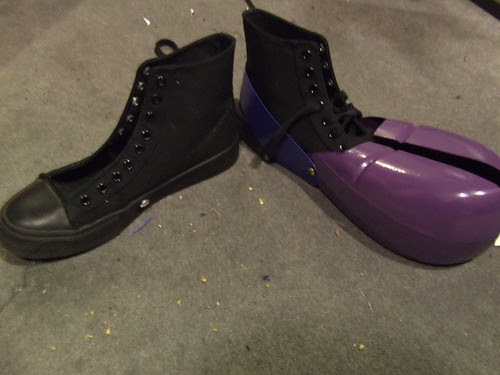 Having now the basic elements of my shoe, it was time to make its covering. Sora's shoes have an unusual shape to them, being something like high-tops but looking more like cloth. The color irritated me, however, since it was the same shimmery purple that was present in all the edging on my outfit: the stuff that I had used stretch velvet on. Purple stretch velvet was NOT going to make a nice, smooth shoe cover, so I tried a little something new. I liquid-stitched the velvet onto black 3mm foamies, and then trimmed it down to the exact shape it was supposed to be in. 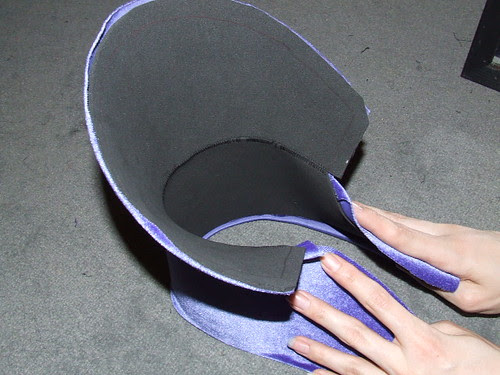 Liquid stitch is a fabric glue that comes HIGHLY recommended by me.
Liquid Stitch!
You can buy it at wal-mart, or at a local craft store. As I found out, it is also very good for attatching fabric onto foamies. Be careful, as if you apply it too thickly behind a thin fabric, it WILL seep through. But if you spread a thin layer, then it adheres just lovely.
For best results with liquid-stitch, allow it to dry overnight.

So now I had a basic shoe pattern and back, but I wanted to do something a little more--adding treads. 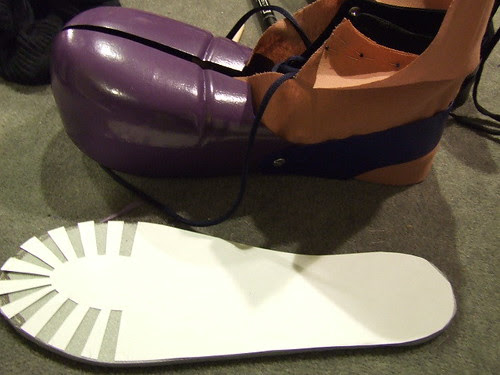 This ended up being a rather complicated process overall, as I cut the treads out of 6mm foam(foamies could be used, although we had a different kind lying around), and still needed to apply some sort of coating to alleviate the 'foam' look. What I ended up doing was coating the treads in about 5 layers of 'Plasticoat,' which is a spray rubber available at Lowes. Its the same sort of stuff that people use to rubberize their truck beds, and it helped seal and protect my shoe treads. Following this, I sprayed them with my purples to give them a gradient.

I used gradients as much as possible on Sora, since he's got such a shifty color scheme. It ended up giving a lot of depth to otherwise flat places, especially on the shoe zipper. Here are my shoes at this stage, with the back cover attached and the clown part in place: 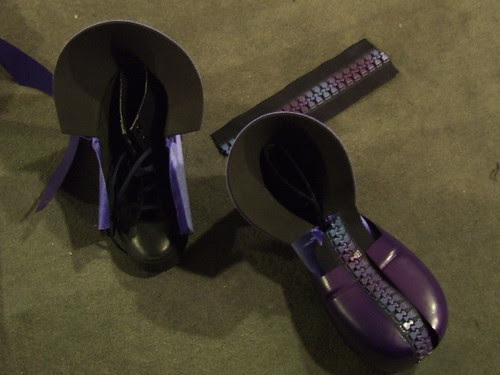 The zipper is not yet attached to the shoe, making that the next step in my process.

These zippers were wonderful things in making Sora. Originally I had intended to use a #10 black plastic biker's zipper, but when I tested the shoe with that, the zipper completely disappeared when one stepped a foot or two away. I needed something larger, so I took one of the #30 zippers we had lying around, cut it in half, sprayed it in a gradient, and saw that it worked AMAZINGLY better. Even nicer was that the cloth tape didn't take the spray-paint, but the plastic zipper did, so the tape remained black on my now purple zipper. ^.^ These can be purchased from the following site, and, as far as I can tell, can only be purchased from here(unless you wanna spend 600 dollars on #30 zipper chain):
Giant #30 Kingdom Hearts Zippers!

But how to attach the zippers to the clown shoe? I was not about to trust ANY sort of glue to adhere a heavy zipper tape onto a plastic, spray-painted clown shoe. I considered stapling, but found it impossible to get at the right angle to do so. Thus a crazy idea was born: I would hand sew the zippers to the shoe. 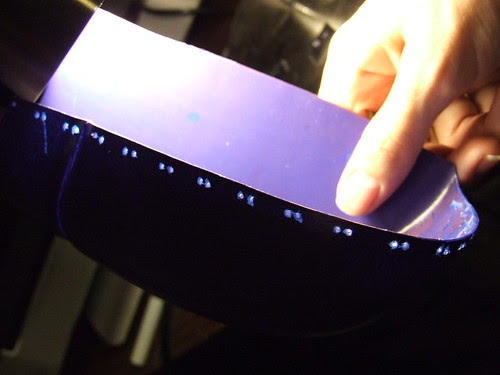 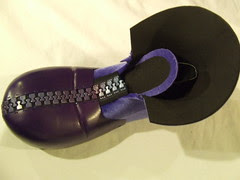 With the zipper on and the clown shoe attached, my shoe was starting to look good! I made a tongue out of more black foamies, and then retrieved my treads for the long gluing process.

I examined several pairs of shoes that were lying around, and noticed that there was a nice bead seam between the treads and the shoes. To duplicate this seam, I grabbed up some piping, painted it black, and attached it to the treads. 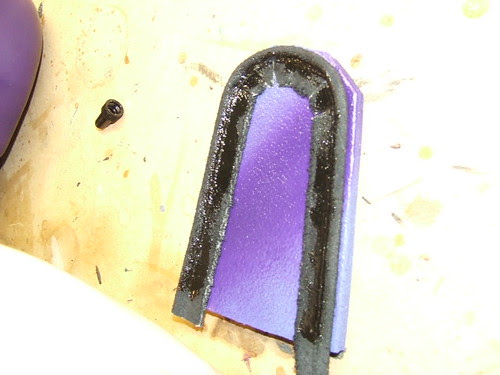 The glue I used at this point was called Contact Cement, supposedly a good glue for adhering cloth to plastic/rubber. This glue was functional, although it did start to come off after several hours of wearing my Sora shoes around. I would suggest something stronger, and I will probably be using a 2-ton epoxy when I re-do my shoes. One thing to note is that powerful glues tend to dissolve spraypaint, so be cautious when gluing that you don't drip it ANYWHERE.
Contact cement, also, adheres on contact(hence the name), so I had to be EXTREMELY careful when I attached the soles to get the placement right on the first go. This took a few 'placement' runs, before I actually put the glue on. But it seemed to go well!

The only thing I had left to do was attach Sora's straps onto the bottoms of his shoes. The initial step for this had to be done BEFORE I put on the treads, since his straps disappear beneath them. In the beginning, I had wanted to use the same black material for straps that I had used in the rest of the outfit, but I realized that would require me attatching velcro to the straps so I could get my feet in and out of the shoes. It would also require extremely exact placement of his shoe-buckles, which un-nerved me quite a bit. To alleviate this problem, I went with a nice stretchy elastic strap on his shoes, which allowed me to put my feet in without ever even removing the straps.

At this point, the shoe is pretty much done. The only additional step that I did was to add a nib in the front, and put some trim on the edge of the zipper to cover up the thread from where I sewed it on. Voila! A Sora shoe. ^.^
Posted by Unknown at 9:27 PM

wow... cool! I could use this. I want to cosplay as Sora halloween-KH.

thx for this great tips. btw, you can visit my blog, so we can talks each other about cosplay. see you.

This blog covers some frequently-asked questions regarding techniques and materials we experimented with when creating our costumes & props - including demos from cosplay panels and Armor Parties. There is no particular order in the presentation as this is not meant to be taken as a complete tutorial of any one entire cosplay, but rather as a log of findings that may prove useful in other applications.

Link-free, but please do not directly reproduce any of these posts in other tutorials, articles or wikis without permission. Content will be edited and expanded over time.